When I was a little girl growing up in the South Valley of Albuquerque, I was introduced to Natillas by a chef named Leroy who cooked in a little cafe on Bridge Street near the river. He took great delight in watching me eat it and most times, when he saw us coming into the restaurant I believe he began a batch just for me because he always had it warm and those were the days before microwaves!

I didn’t know until recently that Natillas is considered to be a dish for Lent. I’m so happy Leroy made it all the time! If you’ve never tried it, it’s creamy, vanilla pudding and really simple to make. 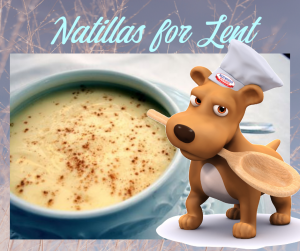 Bring 3 cups of milk to a boil

This is wonderful when served warm but many prefer it chilled. Your decision!