In northern New Mexico, at the foot of the Sangre de Cristo Mountains, lies Taos. 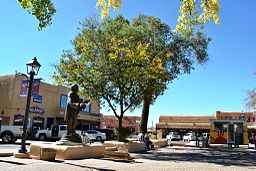 Taos is one of the most magical places to spend the holidays and if you are traveling by RV there’s no reason to be concerned about being away from home for the holidays. Taos makes everyone feel welcome and shortly after you arrive, you will feel like this is your new home away from home.

This area is absolutely beautiful during the holidays! You will love the winter temperatures, which are mild in comparison to other areas. You can have warmer weather during the day, but still have the opportunity to hit the slopes for some snow and skiing if you want. There are many activities to do while visiting Taos and the locals call many of the New Mexican celebrations “Yuletide in Taos”.

During the holiday season, carolers begin singing at the Taos Inn and walk along the streets until they reach Ledoux Street. Ledoux Street throws an annual block party with the street lined with thousands of luminarias called the Lighting of Ledoux. The festivities begin with a parade that includes giant puppets, bands playing music and Santa Claus. There are numerous bonfires lit on the street as well, so you can stay warm as you watch the parade and then walk along to visit the shops, museums and art galleries.

Christmastime usually means shopping and lots of it! At the Yuletide Arts and Crafts Fair, you will find unique gifts from candles, jewelry, handmade soap, silk scarves, stained glass, woodworking, quilts and so much more. Every afternoon, children can have their picture taken with Santa too. The TaosFolk store is a famous store in the town that only opens up during the holiday season. This store can be found behind the Taos Inn – you will be amazed at the beautiful handmade gifts that can be purchased from the local artisans at a reasonable price.

No one will want to miss the Christmas Eve Procession in town on December 24th at dusk. Taos Pueblo men  shoot rifles into the air and then carry a statue of the Virgin Mary through the one-thousand-year-old Taos      Pueblo before returning her to the church. The Taos Pueblo is a UNESCO World Heritage site and it looks    breathtaking with the winter sunset in the background.

Then on Christmas Day, thousands of people venture over to the Taos Pueblo Plaza to watch the ancient  Native American ceremonial dance called Taos Pueblo Deer or Matachines Dance. This dance honors the  winter months and is a sacred ceremony, so no one is allowed to take pictures or videos of the ceremony. 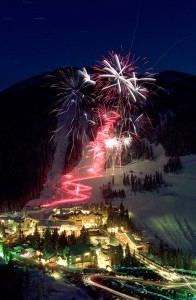 The world famous Taos Valley ski slopes also turn magical on Christmas Eve when every skier goes down the mountain trails holding onto flares. Many of the area ski slopes like Angel Fire also offer torchlight parades and fireworks throughout the holiday season. 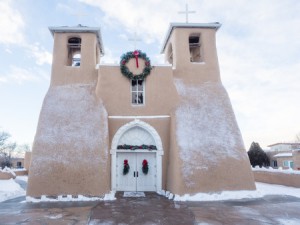 No one should leave Taos without visiting the San Francisco de Asis Mission Church which was built in the late 1700s. This    church is so important to the entire community that every year, volunteers gather to re-plaster the church in order to keep it in  excellent condition. Inside the Parish Hall, people have the opportunity to see the infamous 18th century painting by Henri Ault.  The name of the painting is The Shadow of the Cross but is also known as The Mystery Painting. The reason for the second  name is because whenever the painting is viewed in the dark it actually glows. 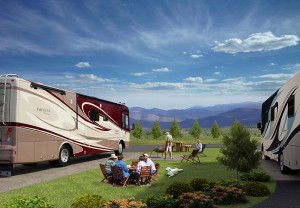 The top places to park your RV in Taos is the new Angel Fire RV Resort (20 miles from Taos) and the Taos Valley RV Park and Campground. Check them out.

If you’re traveling down Old Route 66, be sure to stop in and say “Hello!”