September is National Tailgating month, so how & where did tailgating get its start?

Just imagine pulling into the coliseum parking lot in Rome with your chariot hooked up to a complete kitchen with “hog on a spit”, sausages on the grill, wine rack, fresh water sink, and tableware! OK, Tailgating doesn’t go back quite that far, but The Romans did party quite a bit in the coliseum stands.

Today’s version of a tailgate party most likely started in college football, that was first played at College Field in New Brunswick, New Jersey, between Rutgers and Princeton in 1869. 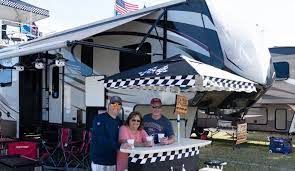 It was basically the first time a managed conflict that brought people together socially, also included completely mobile, vehicle-based kitchens. The term “tailgating” first came from flopping down a wagon or pick-up’s tailgate and using it as a table or bench to hang out prior to pretty much any sporting event. 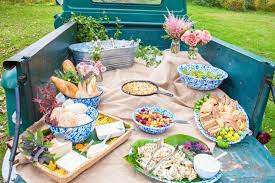 But we’ve come a long way Babe! Some Tailgating rigs, (yes rigs as in Motor Homes) can cost over a million bucks! But you can tailgate in any camper or RV if you are a dedicated fan. And these days, 70 to 80% of Campers & RVs sold come equipped with an outside kitchen, so you can just park and start cooking.

Sinks, microwaves, refrigerators even flat screen televisions so you can watch the game while you cook. 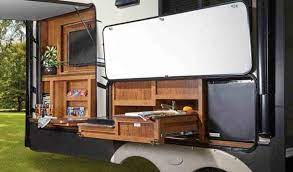 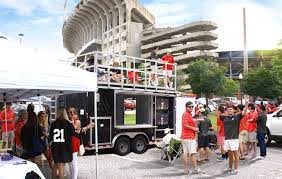 Yes, watch the game! Interesting enough, reports show that over 30% of tailgaters never enter the stadium. They are just there for the party.

Check out the 28 models in stock that feature outdoor kitchens.